Update - June 2021: Please see our statement here about the Coronavirus situation in the UK. 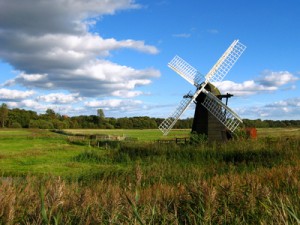 A land of big skies, wide horizons, forest and marsh.

Let’s start on the River Stour in the Dedham Vale…Constable Country. Suffolk’s greatest artist, John Constable, was born in East Bergholt. He was inspired by the stunning countryside, which is still much as it was. North to the architectural gem of Lavenham. With its 300 listed timber-framed houses, it has been described as ‘the most perfect of all English small towns’.

To the Suffolk coast – always under threat from the sea. Among its victims was Dunwich, the ancient capital of East Anglia…now just a hamlet. Aldeburgh also suffered and now hosts the world-famous Aldeburgh Music Festival.

Suffolk’s two castles were built in the 12th century. Orford guarded the coast, while Framlingham protected its strategic site further inland. Both offer fantastic views.
The county town of Ipswich has fine buildings that reflect its role in the wool trade of Tudor times. That enormous wealth also saw Suffolk’s many exquisite churches built.

Sutton Hoo, overlooking the River Deben, is one of the most important archaeological sites in England. The burial ground of Anglo-Saxon kings revealed fabulous gold treasure. An exhibition hall tells the story. More ancient history comes to life at the West Stow Anglo-Saxon Village, built on the site of an original settlement.

And if you enjoy a flutter, do visit Newmarket…the home of British horseracing.

Find a Bed and Breakfast in Suffolk

Bed and Breakfast Guides by County

We welcome your comments as a visitor to our website, to help us provide useful and accurate information:

Discover The Rich Tapestry That The British Isles Offers